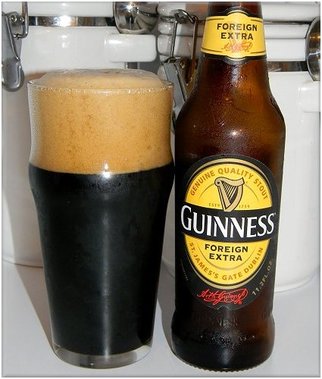 "This version of Guinness may be called export, but it's often difficult to find in Britain. It's currently available in Sainsbury's so my advice would be to buy several bottles and lay some down for future enjoyment. Foreign Extra Stout is a palpable link with brewing practice in the 19th century. One beer destined for blending is matured in the Dublin brewery for up to three months. During that period, it picks up a slightly sour and lactic character. It's then blended with fresh young stout and the bottles are held in the brewery for a further month to allow the flavours to meld. FES is brewed with pale malt, 25% flaked barley and 10% roasted barley. Galena, Nugget and Target hop varieties create a mighty 60 units of bitterness. The finished beer has the slightly sour and musty aroma that brewers call "horse blanket" and is the result of action by the yeast during the long maturation of the older beer. The aroma is complex, with bitter roasted grain, a woody and vinous note and spicy hop resins. The palate is bitter from roasted grain and hops, balanced by dark fruit, with a long, dry and bitter finish with hints of liquorice and dark mysterious fruits, including something akin to sour bananas. FES is the base for the strong versions of Guinness brewed for the Belgian market and for Africa. For Africa, a dehydrated hopped wort is sent from Dublin and is blended with a pale beer made from barley malt and sorghum. 2009 marks the 250th anniversary of Guinness brewery in Dublin and there is no better way to salute Arthur Guinness than raising a glass of Foreign Extra." - Tom Cannavan

From the Guinness website:
Foreign Extra Stout is brewed with generous hops and roasted barley for a bittersweet balance & full-flavored, natural bite. Developed over 200 years ago for global export from Ireland, the addition of extra hops ensured this Stout would arrive to its destination in perfect condition. Today, Guinness Foreign Extra Stout is enjoyed by millions of people around the world. 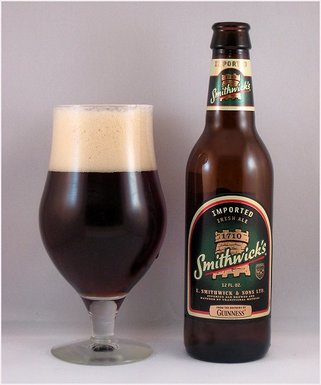 "In 300 years of triumph, adversity and above all, brewing, you learn a thing or two about ale. This, our original Red Ale, is a blend of mild hops, sweet malt and roasted barley. Like the castle at the heart of our Kilkenny home, it’s stood the test of time throughout Irish history, and earned its rightful place as Ireland’s most loved ale. 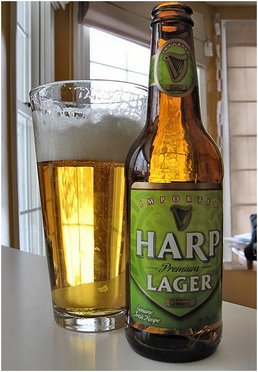 Harp Lager was first produced in 1960 in The Great Northern Brewery, Dundalk as a bottled beer. By 1961 it was brewed under an alliance of the brewing companies, Courage, Barclay & Simonds, Scottish & Newcastle, Bass, Mitchells & Butlers and Guinness. These companies grouped together under the name of the Harp Lager Ltd. By 1964 it was being sold on draught and quickly became the category sales leader.
Style description: Euro Pale Lager
Link to product website: None 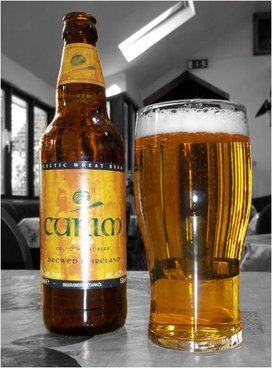 The name “Curim” was inspired by an old Celtic word for beer and echoes the Celtic heritage of the place where Curim is brewed today.

Curim Gold has a higher hop rate than mainstream wheat beers and was critically acclaimed by the late Michael Jackson when he selected it amongst his top 10 favorite wheat beers in the world. - The Independent, London - 2002

Appearance:
Bright golden hues topped by a foamy white head.
Aroma:
Hints of peach, banana and plum on the nose.

Flavour:
Curim is fruity and refreshing with undertones of peach, banana and plum and finishes with just a hint of hops to provide thirst-quenching satisfaction.
Aftertaste:
Curim has a higher hop rate than the mainstream wheat beers which leaves a slight tart-hoppy residue, enough to balance the delicate fruitiness and make Curim an ideal accompaniment to spicy foods.
Food Pairings:
Excellent with spicy and flavorsome foods.

INDUSTRY AWARDS & ACCOLADES:
•  Selected as one of the “Ten Best Wheat beers” by internationally renowned beer critic Michael Jackson – The      Sunday Independent - May 2002.
•  Winner of a Silver medal at the Independent Irish Craft Brewers Competition. 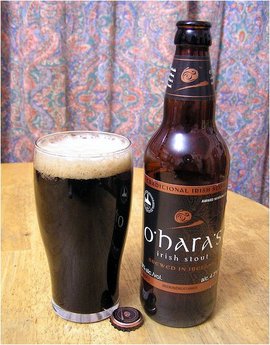 From the website:
Think of Irish beers and you think of Stout! Drink an O’Hara’s and you are drinking a “True Irish Stout”! Carrying the family name of the brewery founders, this multi-award winning traditional dry Irish stout, deep black colour with a reddish hue when held to the light, pours with a thick creamy head that is almost tan in colour. The Irish Times wrote of O’Hara’s, “...anyone with a stout memory will find that the crispness and lucidity of O’Hara’s evokes the pleasures of nostalgia almost as much as the pleasure of drinking. This award-winning full-bodied and luxuriously smooth dry Irish Stout brings one back to how Irish stouts used to taste”. (Irish Times quote from 2000)

Appearance:
A deep black colour with a reddish hue when held to the light.
It pours with a thick creamy head that is almost tan in colour.
Aroma:
On the nose the drinker experiences a rich and complex coffee aroma with light liquorice notes.
Flavour:
This Stout has a robust roast flavour with a full bodied and smooth mouth feel.
The roast flavours lead to a dry espresso like finish.
Aftertaste:
A generous addition of Fuggles hops lead to a tart bitterness which mingles with the roast
espresso flavours on the tongue.
Food Pairings:
Excellent with Seafood particularly shellfish and smoked salmon.
Also pairs well with strong flavoured cheeses and dry cured meats such as Parma ham.

INDUSTRY AWARDS & ACCOLADES:
•  The Irish Times wrote of O’Hara’s, “...anyone with a stout memory will find that the crispness and lucidity of O’Hara’s evokes the pleasures of nostalgia almost as much as the pleasure of drinking”.
•  Silver Medal at the BTI World Beer Championships – Chicago, USA. - 2009
•  No.1 Beer at the Milan Beer Festival (cask-conditioned). - 2008
•  Bronze Medal at the Stockholm Beer Festival. - 2008
•  Winner of the overall Championship Trophy and two Gold medal winner at the Millennium International Brewing Industry Awards. - 2000
•  O’Hara’s Irish Stout has also received accolades from the CAMRA group for its cask conditioned version.
•  Critically acclaimed by such renowned beer critics as the late Michael Jackson and John McKenna, author of Ireland’s Bridgestone Guide. 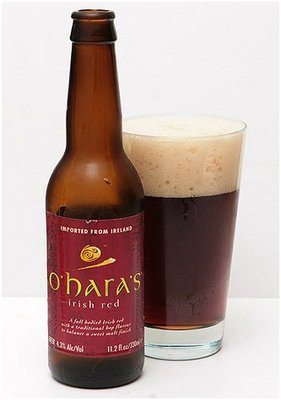 This red ale stands out in this beer style category. The malt body is as impressive as a bock, albeit in a uniquely Irish way. With an incredibly smooth malt body complimented by caramel tones and perfectly balanced in bitterness, this Irish Red is much more complex that its mainstream rivals.

Aroma
The malt aroma is immediately present and lasting with a tiny hint of roast barley, with an unmistakable fruity and almost herbal quality to the aroma due to the late addition of Mt. Hood hops.

Taste
The addition of a pinch of roast barley during the brewing process lends a distinctive bite which is balanced by a crisp medium bitterness. The caramalt flavours follow all the way to the end.

Brewer's Note
The wonderful malty caramel notes and flavours found in our Irish Red come from a healthy addition of caramalt to the mashing process. The sweetness generated is balanced with dryness of the crystal malts. Visually, the Red colour is intensified by the finest roast barley, while subtle hop additions in the kettle give just the right bitterness and aroma to craft this distinctive Irish Red Ale.

Red Ale
The traditional red ale style is sweet malt based, dominated by caramel malts which give a sweet malt base complimented by nutty flavours in complete contrast to the Belgian Red ale style which has a distinctly sour character attributed to lactic acid.

In recent years this sweet malt beer style has seen a renewed interest amongst the Irish drinker and O’Hara’s Irish Red ale (formerly known as Moling’s Red Ale) is an excellent example of the style.