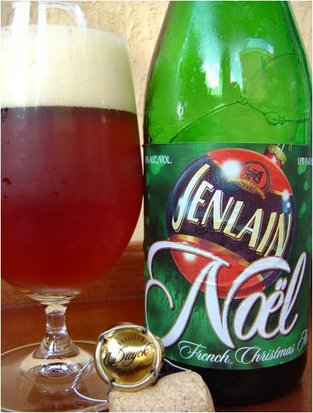 The tradition of Christmas beers is particular to northern France. In the years following the Second World War, the breweries used to sell an original, richer and stronger beer at the same price as year-round beers: this was their gift to their customers. The Duycks have perpetuated this custom by creating a special beer sold at the usual price.

Produced with more malt than Jenlain Ambrée (3 different types of malt made from French-grown barley and three varieties of the most aromatic hops from Alsace), this top fermented, unpasteurized beer, best served at between 6 and 8°C, has a rich amber glow, a denser head and stronger alcohol content and darker than the traditional amber beer, its torrefied undertones are reminiscent of flowers and caramel. 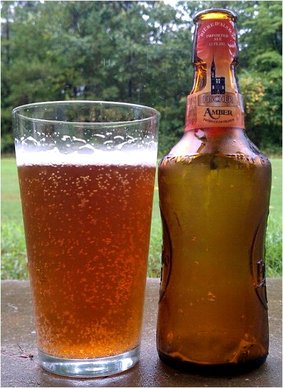 This Fischer beer combines traditional Germanic brewing techniques with the passion of French culture to create a truly exceptional beer. The finest natural ingredients, including pure water from underground wells and locally-grown malt and grain, produce a beer that is full of flavor and uniquely French.

Established there nearly two centuries, beer Fischer is part of the history of Alsace . It is in 1821 that John Fischer founded the Brasserie de l'Ours Blanc in Strasbourg. In 1850, the Alsatian beer was a great success: each day, a train supplies Paris. For lack of space, and because of the frequent flooding of basements in the center of Strasbourg, the brewery moved a few kilometers from the capital of Alsace in Schiltigheim, the " City of Brewers . "

The location is ideal due to its high purity water, which allows the brewery to develop alongside other breweries that are the hallmark of the city. This is also the time when a new name was given: it is a tribute to its founder, Brasserie Fischer . Brand through the decades, and can adapt to circumstances: for example, when Alsace became French again in 1918 to mark its commitment to the country, it renames his beer Fisherman. Indeed, Alsatian Fischer means fisherman. And for better recognition, they chose in 1934, its emblem: the little guy Fischer, mounted on the barrel, the Fischermannele in Alsace. A choice that will prove beneficial, since today, eight out of ten French are able to recognize it as the flagship of the brand. 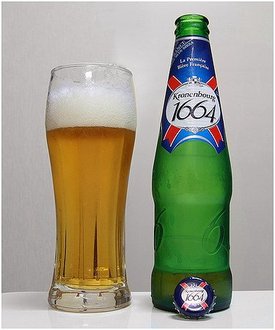 From the Carlsberg website:
This strong, traditional beer was named after the year the Hatt family, the brewery's founders, first started commercial brewing.

Made with selected malts and an exclusive yeast, this darkish beer with golden highlights has an aromatic hoppiness and a subtle bitterness that comes from a long maturation in the cellars. Ideal for drinking on a terrace, as an aperitif or simply for the pleasure, Kronenbourg 1664 is the market leader for high-end premium beers.


Kronenbourg 1664 is the best selling super-premium beer in France and the UK, as well as the world’s best-known French beer. Kronenbourg 1664 embodies the refined French art of pleasure, bringing a taste of enchantment and romance to everyday life. While the brand has 350 years of heritage, it is effortlessly contemporary and is synonymous with sophisticated fun.

In 2008 Carlsberg Breweries took on control for the Kronenbourg 1664 brand as part of the acquisition of Scottish and Newcastle. Geographic expansion and proposition has led the brand to a leading position in the International premium beer market.

Kronenbourg 1664 is the only beer to have won a gold medal at the prestigious International Brewing Awards twice in 2004 and 2005. Moreover, the Brandz Report from Milward Brown has shown that Kronenbroug 1664 has entered the "premier league" moving from the 12th to number 10th fastest growing beer brands in the world. 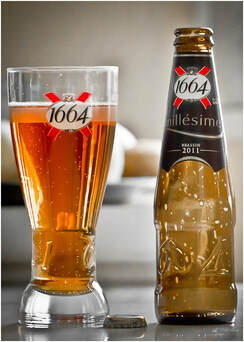 1664 Millésime beer is a tasting beer of great aromatic richness. It is the result of the expertise of the master brewers and the malt of the last harvest (spring malt). That's why each vintage is unique and reveals each year different aromas. She holds 6.7%.

The 1664 Vintage 2017 beer combines caramel malt flavors with hints of honey and liquorice, giving it a rare intensity and complexity in taste. 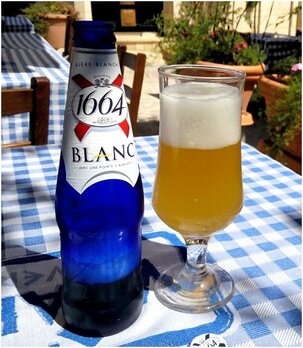 "As a modern, fruity and refreshing beer, Kronenbourg 1664 Blanc appeals to consumers all over the world with its unique taste and appearance.

Brewed with a hint of citrus and coriander spice, Blanc has an inimitable sweet and refreshing flavor that makes it special amongst all the other wheat beers (white beers). It appeals demanding quality seekers." - Kronenbourg website 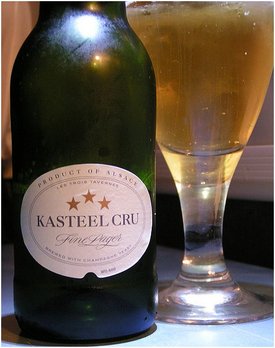 "Brewed in Alsace with Champagne yeast, this lager beer pours a pale golden colour with a thinnish white head. It has a nice aroma, with a hint of herbs, plenty of zesty lemon and a slightly schisty, smoky background. There is a little sweetcorn note that detracts slightly. On the palate this is very clean, crisp and fresh. It is sharp and focused, with a sprightly palate feel displaying plenty of fresh lemon fruit and just about enough bite from acidity and a background hoppiness. It is a very well-mannered lager, though of an essentially simple and refreshing style." - Tom Cannavan